Hate...What is hate?Is it ever "Ok" to Hate?Is it "Ok" to excuse or Justify using Hate when needed?I call it the Devils Blood.In my opinion Hate is not "Ok",Hate should never be justified to make it "Ok". All these hateful & malicious comments being made directed towards Casey is nothing but Hate,the Devils blood is running crazy through their veins.I could never picture myself saying how one should be killed or even go into details,even if I believed someone was a Murderer.These people saying these hateful things are no better than any Murderer. In my eyes you have the same Mentality as a Murderer,only difference is you haven't physically committed the act.Therefore you are no better...With all the discussions on Bullying I just am astonished at how many adults continue with this behavior. Your showing & teaching Children,our future generation that hate & hateful acts are "Ok" under certain circumstances.When indeed they are not,Hate is never "Ok" ,Violence is never "Ok" .No matter what your Religion is,whether you believe in God and the Devil or not,I am sure we can all agree there's Good Vs.Evil/Bad.In life "Things" "People" "Obstacles" are going to be thrown in your way,some Good..some  bad.You can do one of two things let the bad consume & take over you or try to learn and build from it.While I can name call back or criticize these people for being consumed by Hate,the Devil's Blood,I've learned to be more Patient and have better communication skills.Have you learned or been consumed by the Devils Blood?
Posted by Free_Casey at 7:55 AM 5 comments:

There are no words to explain how furious I am about the Video that Casey's Therapist released,without her permission.In order to better herself she has to put some faith into these people "Helping" her which I'm sure is extremely hard for her to do,& I am sure she has it in the back of her mind they could potentially turn on her with still leaving to put trust in that person.So now this person has released this video which I'm sure there are more & is making a ton of money people shift the blame on Casey.Claiming she's the one making money off of it.If people really cared about anyone making money off Caylee than they would direct it right at the source.I see all these hateful comments directed at Casey but none towards the person who collected off this video.Everything from the start of this case to the end to currently is totally backwards.I can see Casey is going to go through a lot of bumps to get where she needs to be mentally & from reading her Jail house letters I know she has the strength,willpower & higher power to do so.Everyone claims their tired of it "Being about Casey" so why not open your eyes & start holding the right person accountable.I also believe this was a strategic move from Zenaida's Atty.Morgan who is now filing a Motion to make Casey testify.Also don't let these people fool you into believing that they can't make money from YouTube because they certainly can & will.With all the views the video has received in such a short period of time it's only a matter of time before they Partnership with YouTube & start collecting.Lord knows they've received great publicity through all the Media coverage its received and by doing the interviews.
Posted by Free_Casey at 10:43 AM 3 comments:

So Dr.G had her "Special" air last night.I found it rather appalling & distasteful,that's putting it lightly.I like how she claims the money she makes from it she's donating to Charity.Just like Cindy & George's Charity where only 20% actually went to Charity.Although it really doesn't matter if all went to Charity because she still achieved what she wanted which was promoting her new show coming up.Which she will profit from & not have to donate...I really am astonished by people like Dr.G,& Nancy Grace.They of course pick a Children's charity,I guess it makes more "Ok" to continue profiting from Caylee's death.These people may do one "Special" & "Donate" proceeds to Charity however they are gaining from it in the long run.The more these people spread Hate towards Casey,the bigger their audience.Which means even more money in their pockets & the end of the day.These people such as Dr.G & Nancy Grace feed off the weak minded,they know how people let their emotions take over when dealing with a child's death & they have most certainly used that against many.These are the same people who claimed Casey would make millions off Caylee's death,a little contradicting isn't it?Yet people still choose to support these people.Another thing I don't quite understand is how these people are getting away with still saying Casey is Guilty.I don't know what Ashton is talking about when he say's Imperfect Justice,in the Public eye she was found Guilty & still acknowledged as being Guilty.Casey must be more involved with her higher power than what I though not to do anything about it.I just don't understand how more people don't see this going on....I wish for 2012 more people would put their emotion aside just for one moment so they can begin seeing this.God Bless & Love!
Posted by Free_Casey at 6:10 AM No comments:

First Jeff Ashton retires,makes several TV appearances,a Book,& now possibly a movie.I believe from the beginning Jeff realized all the Media attention this case was drawing in and he took it as an opportunity to make a fortune.I believe certain things were done on purpose to make people even more drawn into the case such as making this a Death Penalty case.In my opinion Jeff Ashton turned this whole case into his "Own Reality Show" The fake Chloroform searches,Imaginary "High" Chloroform readings from his Fictional Dr.Vass. The Duct tape he claims "Had to be over the mouth & nose" because there's just "No other explanation.The list goes on and on. He knew from the beginning there was noway Casey would get the Death Penalty,however it made people even more drawn into the case,which equals more money in his pocket.Anything he could do to "Excite" the case,draw more people into,he did. He acts surprised that Casey was acquitted,it's all an act.If anything he was surprised he couldn't persuade the Jury based off their emotion. That's all this case has been based on from day one is Emotion.If people would put their emotions aside and see what's really going on its actually fairly easy to recognize.Jeff Ashton has been completely taken over by Greed,a lot of people have.The same people who have told you Casey would be making millions,and told you to stay away from anything she's making money from...Yes those are the same exact individuals profiting from this case.
Posted by Free_Casey at 9:42 PM 4 comments:

As expected this interview was to ensure the finger stays pointed at Casey.George let Cindy do most of the talking while he waited for opportunities to run Casey down.
Dr.Phil starts discussing with Cindy how she always tries to find good in people,giving them the benefit of the doubt.And goes on making a comment about Casey at the club & is quick to say "I'm not trying to make excuses for her or anything." I'm not buying it,just like her suggesting Casey's seizures may have played a role in Caylee's death.Her "excuses" are ridiculous & I really believe she's playing the role out of "Making excuses for Casey" She can't give reasonable/legit excuses for Casey because the finger must stay pointed at Casey.
What really struck me during this interview was Cindy's response to how she felt after overhearing Casey telling Lee that Caylee was kidnapped.She said she was extremely angry,wanted to choke Casey,even wanted to hit her but hit the bed instead.Who finds out their grandchild is missing & gets so mad they want to choke the mother?And people wonder why Casey couldn't just come out & say it was an accident,could you imagine what Cindy would've done if she did?
Cindy discussed how Casey tried calling her on June 16th,6 times in 4 min.Even tried calling her work.Dr.Phil suggested if an accident really happend wouldn't you think she would've continued calling until she got through to tell you.It's obvious Casey certaintly was trying everything in her power to reach Cindy & had something important to tell her.What stopped Casey from following through?I find it very odd.When asked what she sounded like on the msg,Cindy couldn't "remember".She made a comment that raised a brow,she stated how it won't be over for her until she finds out what happend to Caylee & Casey on June 16.I find it strange how she mentions what "Happend to Casey" she's aware something occurrd for her not to continue calling & follow through with telling her what she had to tell her.
George as always was extremely eager to say Casey is the one to blame for Caylee's death.He says he can't say whether or not he believed she was Chloroformed because the evidence didn't show it.Yet he contradicts that statement by saying he believes she was sedated,although performed drug tests came back negative for drugs.
Certain words,and phrases he used struck me as well.Such as "I'm being honest with my heart"& "Inside of my heart" I don't believe those are genuine statements.I also love when he's talking about missing Caylee he gives an exact date,saying hrs misses her since July 15,2008.He actually gave that entire date.
George made a statement and directed it towards Casey,which I found rather disturbing.He said if Casey is watching or does watch that he wants her to know that he believes she's responsible for Caylee's death.How dare him,how dare you George Anthony.Of course he can't allege it being an accident because how Caylee got placed etc would than come out.And who wants real details about this case.
Dr.Phil replayed a video of a juror whom made a statement saying they believed George had selective memory & felt he was withholding info.His response was it was difficult because alot of the questions were yes or no answers.Everyone who watched the trial is well aware about every yes or no question asked George was sure to answer withan explanation.So what's the real reason behind that?
There's still more questions than answers,George still more eager than ever to put the blame on Casey.Dr.Phil is just like the rest $$$.Was sure to add at the end of the segment that he would never interview Casey.This case has really shown peoples true colors.

Posted by Free_Casey at 5:25 PM No comments: 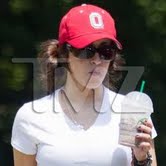 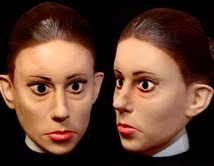 When I first heard about the "Casey Anthony mask" I thought what in the world would one do with such a thing.Than I heard it sold for $1,000,000.00 I was completely shocked.Why would one want a Casey Anthony mask that badly & for that amount of money.Now I clearly see why.This is complete speculation,but look at the resemblance.The outline of the face in the "Casey" picture is the exact same of the mask,and the lips are the exact same.I believe the other photo(gray shirt) of the girl shopping along with the video is a completely differn't face from what is shown above.That face is fuller than what is shown above,and the face shown above clearly resembles the mask in more ways than one.Again this is pure speculation,you be the judge for yourself.
Posted by Free_Casey at 8:38 PM 1 comment: